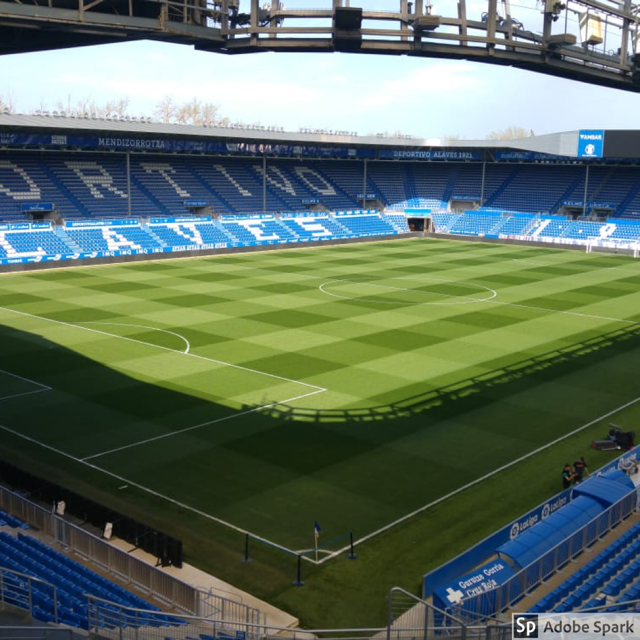 Welcome to the second part of our small series on Groundsmen abroad, in this edition John Stewart ,Head Groundsman at Depostivo Alaves and recently name winning Groundman of the year in La Liga.

I asked John a series of questions which he kindly answered below.

John tells us about about you and how you ended up a Groundsman abroad?

I actually got involved in the world of turf grass through pure chance. I was chosen to play the bagpipes at the US golf open at Pinehurst resort in North Carolina in 1999. Through a chance meeting with a golf course superintendent in a bar, he offered me a job on the number 7 golf course. I loved the work from day one but felt I had to have academic studies in turfgrass in order to progress. After a couple of years, I returned to Scotland and completed an HND in golf course management at Elmwood College in Cupar, Fife. Having met a Spanish girl on holiday I decided to move here. Almost 20 years and two kids later, here I am.

In Spain, I have worked in football, golf, and a race track. After a couple of years at Real Sociedad football club with a subcontracted company, I joined Deportivo Alaves in the winter of 2013 as head groundsman in their training facilities. I have been head groundsman in the stadium for the past four years. I still keep up the bagpipes and had the honour of playing the bagpipes at the funeral of one of my idols, the late, great, Seve Ballesteros.

Can you tell us a bit about,climate, grass and stadiums?

Curiously, when people think of Spain, they think of beaches, long warm days and Magaluf or Benidorm, but the north is very different. The summers are long as are the winters. In the summer months temperatures can reach 40 degrees whereas in the winter, minimum temps get down to -4, -5! Alaves play in a town called Vitoria-Gasteiz in the Spanish first division (la liga Santander) which is almost 600 metres above sea level, around 45 minutes south of the port of Bilbao.

Bermuda grass is obviously out of the question; therefore I use a mix of Kentucky bluegrass (poa pratensis) and English ryegrass (lolium perene). I have also used Italian ryegrass (lolium multiflorum) in the winter months to try and thicken up the sward.

What are the differences between growing grass in Spain v Scotland?

In the north of Spain the varieties of grass are the same as in Scotland. The main difference is disease pressure, especially in the summer months. If I am not careful I could get numerous diseases on the pitch with pythium (pythium blight)) or pyricularia (gray leaf spot) the most common ones. The optimum conditions for growing grass in the north of Spain are at the start of September until the end of October and again from the end of March until the middle of June. Another thing that is very similar in weather conditions is the amount of rainfall.

How is your Spanish with a Scottish accent?

Ha ha. I actually picked up the language pretty quickly. To learn a language you have to live in the country, it’s imperative. I had the advantage that no one in the city spoke english to any level (including myself!), therefore it’s sink or swim. Apparently the pronunciation is easier for scottish people than other english speakers because of the letter “R” which for us is easier to pronounce.

Apart from the weather which I mentioned earlier, the shade is a major problem. I’ve been pushing for grow lights for sometime now, but for some reason or another, they have not arrived yet! The orientation of the pitch means I have shade that runs long ways on the pitch and in the dead of winter covers more than half the pitch.

What innovations are missing that need inventing?

The world of the groundsman has changed so much over the past 10-15 years.

Stadiums are now much more closed in to accommodate the spectator and thankfully so have the way we can maintain these pitches. The introduction of growing lights has certainly been a game changer but I am still convinced that something else, less time consuming and less expensive will come along. Taking advantage of natural light (which is free) must just be around the corner. Fungicides will soon become a thing of the past; therefore there will be a huge market for natural fungicides. I actually use a fantastic product from Ireland called precision microbes. It helps control the organic material and strengthens the roots and stops the leaf blade tearing during games. I have noticed that using it, has resulted in me using less fungicides because of the strength of the grass.

Pros and cons of life in Spain?

Although I miss home back in Scotland, I am really happy and settled here in Spain. The pros outweigh the cons.

The food is amazing.

Life in general is more laid back.

Wages tend to be lower than in the UK.

Learning a new language (It’s a lot of work).

Please tells us about your Groundsman award?

I put my success down to a few things. Firstly I keep things very simple and organised. For example we all know that cutting grass with a blunt blade damages the grass, therefore every time I cut the pitch the machine is clean, filled with fuel and always sharpened. We can always find time to give a mower a quick sharpen. Another thing is if I feel the pitch needs to rest, I do not even step on it. That day of rest I can dedicate to the other 1 million things a groundsman has to do organisation and keeping the shed tidy and clean is a must for me. We lose so much time looking for things because we cannot find things.

Also preparation on match days is fundamental. Giving you plenty of time to cut the pitch, string it up, paint the lines, without being in a hurry. That’s when we make mistakes.

Obviously growing lights are a must, especially since we are starting work on renovating the stadium at the end of the year and that it will be even more closed in.

As far as machinery is concerned, an extra mower always comes in handy. The pitch is 100% natural grass so I tend to use quite light mowers to cut. I have heard very good reviews about electric mowers so a couple of them would be nice.

What are your recommendations about working abroad?

Without a doubt I highly recommend working abroad if the opportunity comes along. Learning a new language and culture is so fulfilling. I have been lucky enough to have worked in 4 countries and every one of them has given me great experiences. We tend to accept our day today lives and that we cannot change anything. Wrong. We are fortunate enough to work in a global industry where british greenkeepers/groundsmen are in high demand and obviously held in the highest of regard. The biggest club in the world has a British groundsman with Paul Burgess at Madrid. This can only be good for us that either wants a change or a wee bit of adventure.

Two top tips to take onto a desert island?

It is always difficult to give tips when there are so many good professionals in our industry. We all have a different way of working but if I had to give a couple of tips to help others it would be firstly be patient and don’t panic, we don’t work in a factory or on a production line so sometimes we have to stand back and think about what we are doing. Secondly, speak to other greenkeepers/groundsman. At the end of the day we are here to help one another. It can be a very stressful job, therefore a problem shared is a problem halved.

Great read John, really appreciate you taking the time out to write this for us.

A Guide to Winter Sports Pitches