The Three Rs of renovation from Petworth -Fulking

The three Rs of renovation (thanks Andy Mackay ,his quote)

2019 starts at the start of the renovations,our aim is to remove litter ,thatch ,restore grass cover and lastly re level (topdrssing).

Prior to renovations we took a few cores of the top 25 mm just to see what depth of scarification would be needed,we had very little thatch but a bit of litter in the top of the grass sward.

Given we had no thatch and a quite well grassed square my priority was to remove the grass cover down to around no less than 20% coverage this will ensure any dead grass is removed and will ensure we didn’t bury any grass under our topdressing.

We are very futunate and have no time limitations and no excuses either ,so we need to ensure we practice what we preach.

Please see below how are renovations panned out,as l say we are time rich but saying that this is such a vital task and a task we only get one opportunity to do properly the time invested is never wasted.

Monday -cut the square down to pitch height and watered to soften a little ready for tomorrow.

Tuesday -scarified in quite a few directions 2/3  mm depth (lost count)and finished with last direction in line of play at 7mm depth to ensure a good key.

brushed up surface of scarifying debris and watered heavily ready for tomorrow.

Wednesday -seeded into scarification lines (maybe should have done last night) about quarter rate ,then dimple seeded we have luxury of a tractor mounted.We dimpled in quite a few directions adding more seed along then way and brushing the seed in as we went .

sarrol roller in a couple of directions would be more realistic for clubs ,if helpers could be found as quite labour intensive ,but certainly would reap what you sow🌱

once seeded against the clock (worries soil would dry out for next stage.

The next stage was to spike the square,we have such good water pressure we can usually fit in a spike but in the real world this is very hit and miss and understandably missed out.

Relevel and firm all the ends although they were repaired during the season though they were all still low and took around 4 bags per pitch to top up x 30 ends ,still feeling it .

Waited for the dew to disperse ,topdressing  and moisture isn’t a good mix so had to be patient , but by  11 am we had our first load on .We topdress with as many  bags as we feel is needed per pitch and place in the hopper and then topdress a pitch at a time till we are finished.

while we allow the topdressing to dry an little we had a well earned lunch ,then on to  moving the topdressing around a bit ,as doesn’t always come out of the topdreser that evenly ,we moved it around using a mix of a drag Matt,brush and finished with a levelling frame.A (ladder /straight edge would do the same thing),the ladder will pull off any topdressing from high areas and pull them into any lows so any level issues this is the best method. 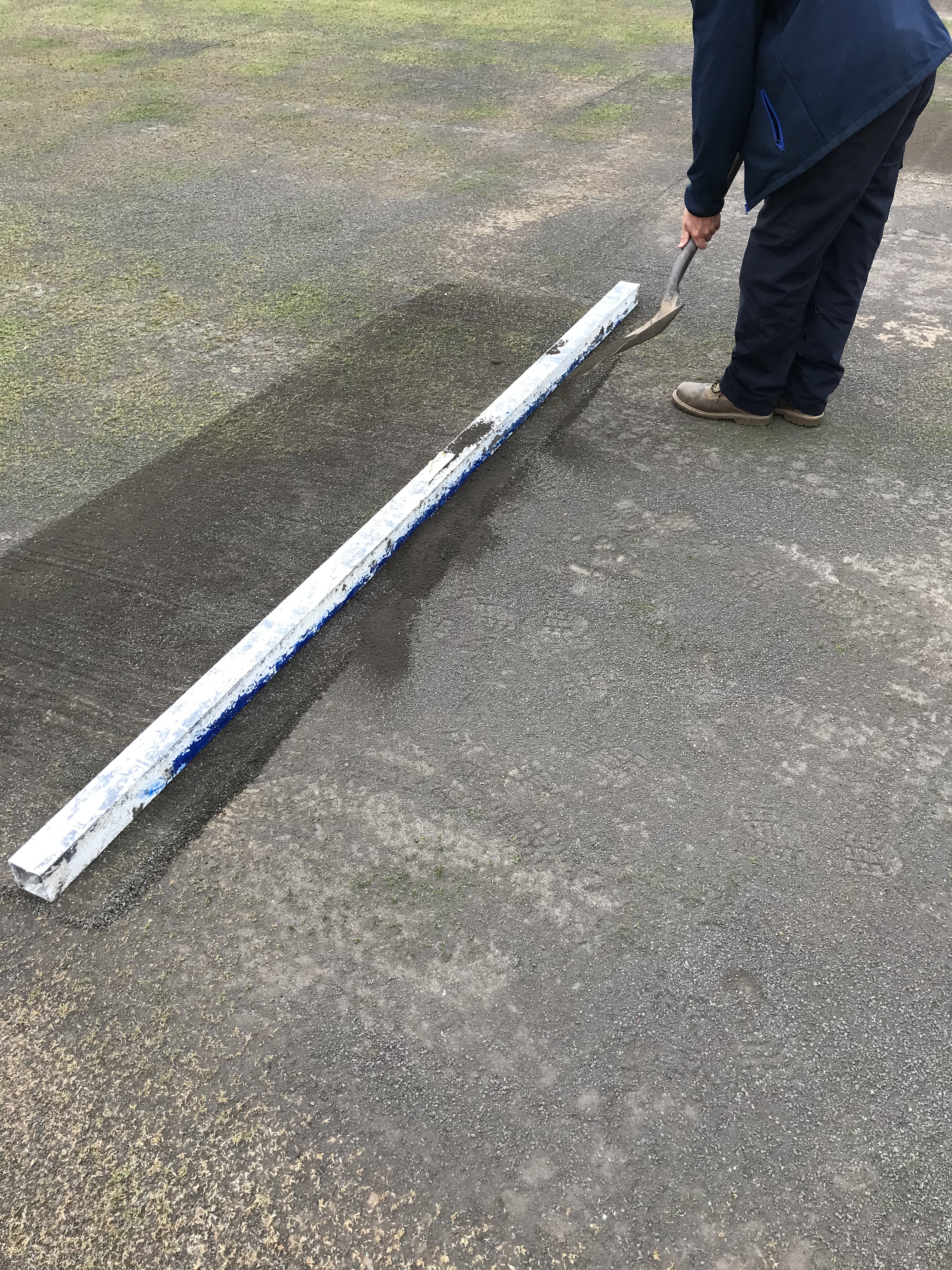 fence up 🍁to keep leafs and vermin off new grass.

Once the dew cleared ,double checked the levels on the ends and addressed any low with a few more bags of Loam as required .

Once happy with the final levels we added a application of a pre seed fertiliser high in phosphate,to aid root development for the new seed.

last job water 🚿 this will now be carried out 6 days a week if no rain till the grass has had a cut or three and we are happy the grass doesn’t need additional watering.

Thats how are renovations turned out,the work still continues over winter ❄️,only a couple of really cold months when we don’t do much on the grass ,but all the time there is growth we will be cutting and feeding.

Hate the expressions putting to bed of a cricket square ,might be the end of the season for the guys in white ,but for us groundsman the aftercare we do now will ensure a good surface for 2019.

Put it to bed at your perel ..

Now here’s to Petworth (more realistic )diary of events ,the three Rs should all be in there whatever our budget,time scale we need to ensure these are all achieved.

Alex Rees, Groundsman
Petworth Park CC
Autumn Renovation
After a fairly light season of play – no league cricket (yet…) – this autumn I wanted to continue the good housekeeping on the square since it was Koroed last year.

The first thing to say is that we’re still learning about the soil we’re on. We know from PSD testing that we have inadequate clay content (17%) for a high standard of cricket, and this season confirmed the theory. It was difficult to keep the surface together and I ended up keeping pitches slightly tacky in order that they didn’t disintegrate on top.

Our aim is to construct a new square in the medium term, but for now we’re making the best of what we have.I elected to go with a hire package deal of a tractor mounted scarifier and cushman drop spreader plus some useful drag brushes and drop seeder this year.

In addition to the equipment, I had a trustee volunteer, Graham, who didn’t quite know what he was in for at the start.

REMOVAL-of thatch and crowning grasses was the first job of the day. We did have some poa annua on the square in amongst the desired dwarf ryegrass. Plus, despite koroing last year, I was surprised how much organic matter was pulled.
The scarifier had been modified with sweeping spacers to click debris up into a collection box and this did a very good job. 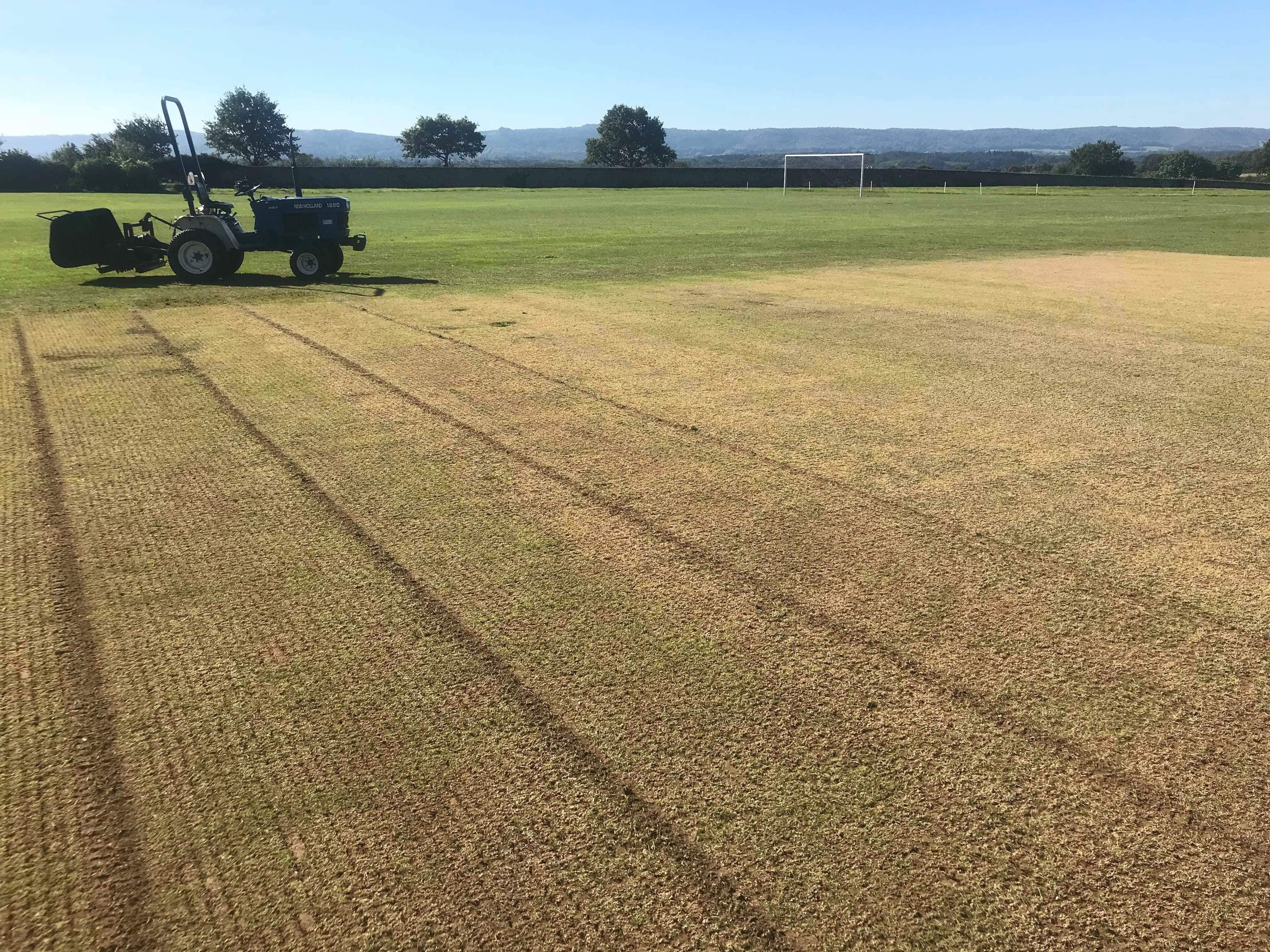 Two passes (one in line with play and one diagonal) removed plenty of fluff and my 4 tonne top dressing order was starting to look a little light.The surface was now looking pretty clean with clear grooves ready for some seed.

RESEEDING-A good friend of mine and well known club groundsman in Yorkshire does seed trials for a well known seed company and I ordered through him his own bespoke cricket square mix. Last year I visited him at his ground in November and he had sprayed off his square prior to renovations, then seeded each pitch on his square with a different grass mix, plus experimenting with microbes. He won’t mind me saying it takes a very special kind of person to do that!

I’m a bit funny about seeding and tend to use a very low broadcast rate on the spreader and make lots of passes in many directions, so by now I’d easily got my 10,000 steps for the day in. I’m not as confident to just crack it on in case I get uneven distribution across the square so I’m happy to take my time.
I followed this in with an autumn/winter fert, and then used a drag brush to get good contact.

RESTORE LEVELS-Well… So even after last year’s koroing we have some historic saddles (especially at one end) and, given our plans to construct a new square at some point, I’m not really looking to do too much chasing levels.

The 4 tonnes were soon swallowed up in the surface by using the Cushman followed by the club’s dragmat. I used some of the little remaining to restore one particular bowler’s deep footholes at the Lodge End, then stored the rest to do the same during next season unless I can get a coach to look at his landing foot this winter.

Overall I’m pretty happy and it’s nice to know we’ve made an investment in our pitch for next season. Some light showers would have been nice, instead I have since irrigated with a flat sprinkler hose to hopefully kickstart the seed.

As we were shovelling the loam from the tonne bags in to the Cushman, I was explaining to Graham the cost benefits of ordering in bulk; he didn’t seem persuaded. I’m sure he slept well that night, all done in a day.
Depending on what the treasurer says this winter, I may top dress again before next season…

Any questions on the above including aftercare please feel free to leave a comment or two.

keep a eye out it’s our SACG annual general meeting coming up we would really appreciate a good turn out ,this is your opportunity to help shape the future direction of the association.

Next months blog ,will be on making your own on site soil strength tests of your Loam and we will be looking at aftercare of the new seed/plant🌱 .

PS massive thanks to Brian fletcher the trailer co ordinator (sacg) delivering the scarifier across the county .Big thanks for your efforts 👏 👏.

How 💪🏻 strong is you loam

Do l Water after Cricket Renovations

Outfield Improvements on a Budget